Dorian Yates is a British-born professional bodybuilder. Along with Phillip Heath, Ronnie Coleman, Lee Haney and of course Arnold Schwarzenegger, he is one of the five most awarded bodybuilders in the history of the sport. His professional career lasted only 7 years, but in this short period the athlete managed to win about 15 awards.

Dorian Yates was born on April 19, 1962 in England. The future bodybuilding legend grew up near the city of Birmingham (Staffordshire), which is in the west of the central part of the country. He was brought up in a loving family that faced several tragedies at once.

First, when Dorian was 13 years old, his father suddenly dies – he died of a heart attack at the age of 42. This loss, according to Yates’ own words, hit him hard as a young man. After the incident, the family – mother, son and daughter, decides to leave the suburbs for Birmingham itself. There, a woman meets a new man who could potentially become Yates’ stepfather. But again, a terrible thing happens – he dies even before the wedding.

In his youth, Dorian Yates demonstrates a rebellious character with might and main: he is an active member of a gang of skinheads, nationalists, who intimidated all local people. As mother and sister move from Birmingham back to the suburbs as a 16-year-old teenager, Dorian is also forced to support his own existence on his own. One of his main places of income was the slaughterhouse.

At the age of 19, Dorian Yates gets into trouble with the law: a young man is arrested for participating in riots. But since in England persons under the age of 21 are not considered fully criminally responsible, he is sentenced to a short term: 6 months and not in an ordinary prison for criminals, but in a correctional center for young people.

Surprisingly, it was there that the future bodybuilder Dorian Yates really got carried away with heavy sports. There were no interesting entertainment for the guys, except for the dedication of the gym, in the correctional youth center, so Dorian focuses on the development of physical fitness. And the thought that if he does not urgently change, then, most likely, he will continue to travel to prisons, did not give the young man peace.

Having freed himself, Yates continues to exercise: goes to the local basement gym, and since the age of 21 tries his own hand at amateur competitions. The athlete’s first serious victory happened in 1986 – he won the British Championships (heavyweight). A year later, he acquired his own fitness center. And about the same time he gets his first dangerous injury – he tears the femoral muscle. Recovery is not easy, you have to go for an operation. But this does not stop the novice bodybuilder.

In 1990, a few years after the injury, Dorian Yates left for the United States to compete with the world’s giants of bodybuilding. Soon he achieves the status of a professional and participates in the Night of Champions 1990: takes 2nd place. Next season, in addition to the Night of Champions competition, he also participates in the Mr Olympia tournament: the results are 1st and 2nd places, respectively (at Mr Olympia, only Lee Haney is second, who, having won the eighth title in a row, ended his career).

In 1992 Dorian Yates performed again at Mr Olympia. This time it is successful – wins 1 prize, like the next 5 years, coming close to the result of Arnold Schwarzenegger (Yates – 6 Mr Olympia titles, Schwarzenegger – 7, but with a break).

The last victory was the most significant for the athlete, because 3 weeks before the performance he tore a shoulder muscle. However, he still won, proving to himself and those around him that he was the best of the best. Subsequently, this injury did not allow the athlete to exercise fully and he was forced to end his career ahead of time (at 35).

That was the end of Yates’ mind-blowing competitive streak, which included 16 wins and 2 prizes.

Nowadays, bodybuilder Dorian Yates lives a quiet family life and is engaged in a sports business. He is married to fitness model Glauce ‘Gal’ Ferreira, whom he met at the 2008 Arnold Classic. This is Dorian’s second marriage. From the first he has 2 children – Lewis and Tany. Like his father, Lewis is a bodybuilder, but has not yet reached similar heights.

Dorian Yates, nicknamed “Birmingham Lion” and “Shadow” from fans and colleagues, had impressive anthropometric data at the peak of his competitive form:

Huge and harmoniously developed muscles allowed the athlete to earn more than a dozen titles in just 7 years of competitive performances, including:

Thanks to her past achievements, Dorian Yates has written books on exercise and healthy eating that are widely published even outside the United States. Today, if you try, you can find “Blood and Guts” (1993) and “History of War” (1998), authored by a bodybuilder. Also in 1996, he released a series of video tutorials on training, named after his autobiography “Blood and Guts”. There is another series of training video tutorials: also called “Blood and Guts” (2012), but created by a bodybuilder not independently, but in cooperation with bodybuilding.com.

For Dorian, books and photography are nothing more than a hobby. The main profit comes from his personal business. Yates is the owner of DY Nutrition and Temple Gym.

Dorian Yates, having tried numerous workout programs in his youth, chose a 6-day split as the optimal one: 2 days of exercise + 1 day of rest, then 2 more days of exercise + 1 day of rest, which he did in 1995-1997. He, unlike Lee Haney, preferred the maximum number of repetitions to the multi-set system, working to failure in each approach: an average of 1-3 sets from 8-10 reps.

This Dorian Yates workout plan meant doing exercises on the front deltas, traps and triceps on day 1, on the back and back deltas on day 2, on the chest and biceps on day 4, and on the thighs and shins on day 5. The athlete trained abs every next day after rest – that is, on days 1 and 4.

Despite the fact that Yates has long ended his career, he tries to keep himself in shape. Dorian turned 54 in 2016, but he still looks sporty. Confirmation of this can be obtained on the official pages of the bodybuilder on social networks – Instagram and Facebook.

The photos will convince you that Dorian Yates has not quit training even now. Moreover, you need to help your only son to swing! 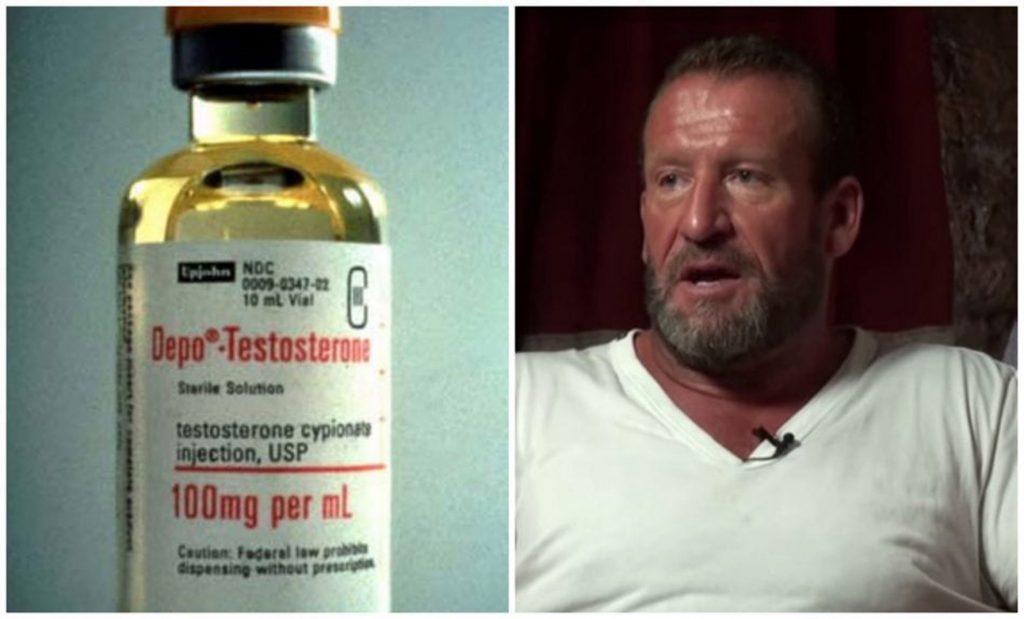 Was Dorian Yates on Steroids?

Dorian Yates, unlike athletes who fear for their own skin, never hid that he was taking steroids. According to him, bodybuilders cannot afford not to use anabolic steroids. First, because everyone around them uses them. If you want to win, buy and use. And secondly, since progress on doping is measured not in units, but in tens of percent. That is: he speaks openly about the benefits of anabolic steroids in sports.

Quote: “In bodybuilding, no one is naturally gifted.” Further, not literally, but with the transfer of the meaning of the original: “There are only hard workers who endure pain every day and overcome the capabilities of the human body. Yes, including thanks to doping.”

Which Steroids Did Dorian Yates Take?

It is believed that in the early stages of his career, as an amateur (1985-1989), he took relatively light anabolic steroids such as Oxandrolone, Methenolone and Methandienone, limited to minimal dosages. And only when he achieved Pro status (1990), he switched to “heavy artillery”: from HGH to Trenbolone Hexahydrobenzylcarbonate.

How much truth is in this, we are unlikely to know. The athlete could be cunning, hiding the facts so as not to discredit himself. Or journalists could twist the same facts in order to get an effective article for themselves.

You may have missed

Reverse Grip Lat Pulldown: How to Do & Muscles Worked

Brachialis (shoulder muscle) learn how to pump it up and increase the volume of your biceps.

How to remove fat from the back and sides