Brachialysis plays a very important role in the development of the hands – it is a muscle that many people do not attach much importance to, but it can make the biceps look impressive.

This muscle is especially noticeable when you are working on the “drawing” of the muscles of the hands. By the way, if you can put it that way, the “decorated” bicep can look much nicer than, biceps on a set of muscle mass of a larger size without shape. You can pay attention and compare the world’s stars of bodybuilding of the past and modern times, and you will notice that the hypertrophy of the brachialis is much stronger among contemporaries. In the volume of the biceps, or rather the hands, the biceps muscle itself does not take much. A significant part of the volume of the hand is precisely the triceps and brachialysis.

Due attention to the development of shoulder muscles is not paid by all athletes, most of the focus is on the biceps and triceps. However, if you make the necessary adjustments to the training program taking into account the brachialysis training, you can increase the volume of the biceps.

I think you already understand how important this muscle is from an aesthetic point of view. This can be seen in the hands of Jean-Claude Van Dam.

His hands are not as great as those of professional bodybuilders, but we clearly see the effect of this muscle. That is, a well-developed brachylis gives volume to your biceps and visually makes the hand more “quality”. This is especially important when you wear a T-shirt with sleeves that open only the lower part of your arm. The fact is that the brachialis is located under the biceps and, developing it, you seem to push the biceps upwards, due to this the volume of the arm increases noticeably.

To understand how to pump up the brachialis, you need to understand what kind of muscle and where it is.

If it’s easier, then brachialis is also a brachial muscle – it’s a fairly large muscle, located deep under the biceps. Like a biceps, she crosses the elbow joint and takes part in bringing the forearm to the shoulder, that is, bending the arm at the elbow. But because the brachialis is attached to the coronoid process of the forearm, and the only articulation of this muscle is the elbow joint, it can bring the forearm bone to the shoulder, only bending the arm at the elbow joint, while the biceps can lead not only the forearm to shoulder, and rotate the brush.Wikipedia says that “the humerus muscle (Latin musculus brachialis) lies deeper than the biceps muscle, starts from the anterior surface of the humerus and from both intermuscular septa (Latin septa intermuscular brachii laterale et mediale), attached to the tuberosity of the ulna (lat. tuberositas ulnae) ».

That is, it turns out that if you hold the brushes straightened, then the biceps is practically turned off from work when the hand is bent. This is due to the fact that it periphyrically attaches to the radius bone, and when it turns into a pierced position, the biceps assumes an inconvenient position, is weakened and can not participate fully in flexing the arm. Due to the fact that the brachialis does not participate in the turn of the forearm, the main part of the work when bending the hand in a pierced position is done by him. 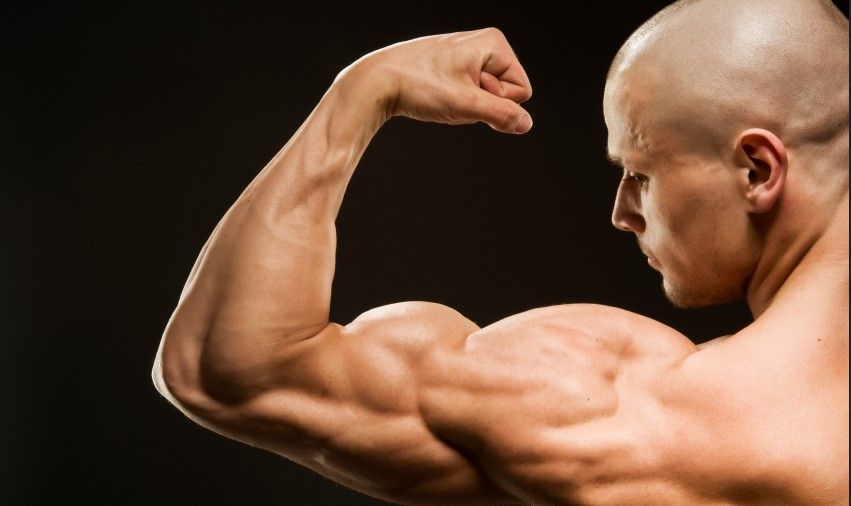 Brachialysis is a muscle, which is the second of the main participants in the process of flexing the arm in the elbow joint. It is not particularly visible, because of its location – in the depths of the muscles of the shoulder. Brahialis, unlike the biceps, does not cross the shoulder joint, but is attached directly to the humerus at one end, and the other side connects to the bone of the forearm. It is attached in such a way that it does not participate in supination. However, this muscle is a powerful flexor of the elbow joint. Scientists believe that about 60-70% of their movement forearm exercises due to the efforts of the brachialis.

When you bend your hand so that the thumb looks up, the biceps is placed in a weaker position than with the other position of the brush. Bodybuilding practice says that it is the brachialis that takes over the load.

Even if the brachialis works more with “hammer” hand flexions, this does not at all mean its automatic hypertrophy. If you think differently, then you should try spider flexion. After several repetitions in this exercise, the brachialis are inflated like balloons.

With an imbalance in the development of the brachialis and biceps, a sensation of pain in the elbow joint area may appear, which will limit your movements when pumping the biceps.

What exercises to use to train brachialis?

To train the brachialis, four main exercises can be distinguished. Of these two exercises are associated with the position of the hands – reverse and hammer grasping. They can be performed equally successfully both with free weight and on block simulators. You can also experiment a little with the brush stroke. Two other exercises are quite specific: they are spider flexions and flexion on the block above the head, they use anatomical features of the biceps position. Brachialis carries a greater load, the closer they are to the head.

Below are the exercises for training brachialis, I will tell you about the exercise, which was mentioned above, “spider bending”.

This exercise can be performed with a straight neck, as well as with a curved, just as well to train a brachialis with such a griffin where the grip will be vertical (there is little where there is such a bar). You can perform lifting for brachialis in the same way, but in a block (the cable goes from below, and you lift the weight by bending your arm at the elbow or training each hand separately).

This exercise with dumbbells, the technique of execution is the same as when lifting dumbbells to the biceps, only dumbbells need to be held vertically, and not horizontally. The external head of the biceps and the ray muscle are also involved in the work (highlighted in yellow).

Ascent to the “biceps” on Scott’s bench, etc. reverse grip (grip on top)

Exercise can be performed both on the Scott bench and on any other similar bench. The technique is the same as when lifting the biceps but only with a back grip or a vertical grip.

This exercise can be performed with a straight neck, curved or with a grip with a vertical grip (handles vertically), as well as dumbbells with hammers (described above). The width of the grip should be on the width of the shoulders, but you can experiment and try to make a grip already, but you must necessarily feel the muscle that you swing. With dumbbells exercise can be performed alternately with each hand or both at the same time.

And so we came to the most interesting exercise – spider flexions.It is very convenient to train brachialis using a bar with a neck for direct grasping. The picture shows several variants of such a rod. To understand what good this bar is, you need to go back to the article and reread the features of the shoulder-ray muscle and how it works. And yet I will remind you that if the hands are put in a direct position, then the biceps does not participate in bringing the forearm, but the brachialis works well. That is, for its pumping you can successfully use a barbell with handles for direct grasping. In fact, you will make the boom lifts a hammer grip.

There are many different options for performing spider flexions, but the common thing about them is the inclination of the body of the body forward. Use these exercises can be for training both biceps and brachialis. But if everything is clear and familiar with the biceps head, then it is necessary to use a straight (vertical grip) or horizontal reverse grip for the shoulder muscle.

You may have missed

Reverse Grip Lat Pulldown: How to Do & Muscles Worked

Brachialis (shoulder muscle) learn how to pump it up and increase the volume of your biceps.

How to remove fat from the back and sides